“Is this a trip of brave Adventurers or just the first of an inevitable trend into a bright future for boating?” 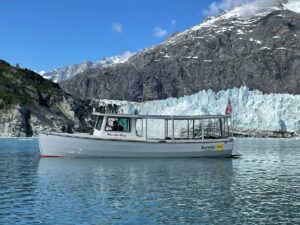 Two men and a dream of almost two decades have resulted in an amazing voyage up the Inland Passage from Washington State to S.E. Alaska. Using only the energy of the sun and Solar panels to charge and provide power to an electric motor, they have traveled by water up the inland passage from Washington State to Glacier Bay Alaska. This is the very first recorded voyage of this type that has been accomplished without other power sources. This voyage is not only of great importance to pleasure boating in general but also to our planet as Solar Electric voyages of great distance have now moved from the hypothetical realm to reality. David and Alex Borton and their 27ft. solar electric boat the “Wayward Sun,” conceived by David who also detailed the design for her solar/electric systems. The “Wayward Sun” was designed by Sam Devlin and built by Devlin Designing Boatbuilders of Olympia, Washington.

She has now completed the first 100% solar voyage up the Inland Passage from Washington State to S.E. Alaska. With 1700 watts of solar panels on her roof, six Torqeedo lithium batteries on board, and a 4kw Torqeedo pod drive they have completed this trip with no additional charging aid or help. Using the Sun as the only power source in an area known more for cloudy skies and rain than bright sunny days this trip proves beyond a doubt that the age of Solar Electric Passagemaking is not only a possibility but a reality. They left the dock May 25, 2021, from Bellingham, Washington State and landed at the dock in Ketchikan, Alaska on June 13 for the first leg of the voyage. The passage thru the beautiful British Columbia was done without going ashore due to COVID restrictions, but once in Alaskan waters, the team was able to land at many stops as they continued up the coast to Glacier Bay, Alaska and then returned to Juneau to conclude the trip. The theory and concept of running a boat totally under the power of the sun has been a passion of the Bortons for many years.

Wayward Sun is one of several successful 100% solar boats built since 2011 and patented under their brand name Solar Sal Boats. This journey is the latest proof that this technology is much more than theoretical, even in mostly cloudy Southeast Alaska. Torqeedo was of great help with the voyage, providing the Cruise 4.0 pod drive, and the (6) Torqeedo 24-3500 lithium batteries. On the roof were 12 flexible Solbian solar panels providing a total of 1730 watts of power. The combination of the solar panels providing power to the batteries and the batteries providing power to the electric drive was the solution to allow such an amazing trip. To keep with the theme of a “Zero” impact voyage the Bortons also used an innovative waste system that allowed them to complete the whole trip without any Blackwater production. The Laveo Dry-flush head system worked like a dream keeping the waste stream controlled and not releasing anything back into the water itself; any waste was disposed of in a proper sanitary landfill and did not contaminate the pristine waters of Canada, and S.E. Alaska.

From the initial inspiration of concept to the reality of a completed voyage the Bortons have trail-blazed their way into the record books. The concept of being able to cruise any coast without internal combustion and Petrochemical use is now possible and with this adventure a new world reality. Solar Sal Boats has designs for 24, 27,38, 44, and 45ft. solar-electric vessels, and has completed the first-ever all solar USCG inspected passenger tour boat.