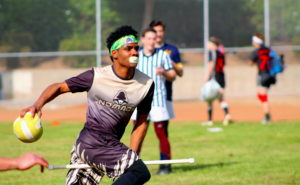 LACEY, Wash.– US Quidditch (USQ) is excited to bring the 2018 Northwest Regional Championship to Lacey, Washington in partnership with Experience Olympia & Beyond.  The tournament will be held at Lacey Thurston Regional Athletic Complex. The tournament will welcome three community teams from Idaho, Oregon, and Washington to compete on the regional stage on February 17-18, 2018. Lacey and the region will host over 60 athletes, officials, and volunteers at the USQ regional championship.  Admission is free to the public. The top team will qualify for US Quidditch Cup 11, to be
held in Round Rock, Texas on April 14-15, 2018.  Want to try the sport for the first time? USQ will be teach youth quidditch both Saturday and Sunday to elementary, middle, and high school students. Advanced sign-up is not required; just stop by the HQ tent on-site. All participants must have a
waiver signed by a parent or guardian. Waivers will be available on-site, and may also be requested in advance by contacting [email protected]
Quidditch is a full contact, competitive, mixed gender sport inspired by the Harry Potter series. It began in 2005 and has since spread to over 300 colleges, high schools and community teams nationwide.

US Quidditch has collegiate and community teams throughout the country. Teams compete over a year long season. USQ hosts eight
regional championships that crown regional champions and are part of the qualification process for teams attending the annual US Quidditch Cup.
Quidditch is played with seven players to a team all mounted on brooms. They score points with the quaffle (a volleyball) and the snitch, a neutral yellow clad athlete who tries to avoid capture similar to flag football. US Quidditch’s official rulebook is available free for download here .
About US Quidditch US Quidditch (USQ), a 501(c)(3) nonprofit organization and the national governing body for the sport of quidditch, organizes the Northwest Regional Championship. USQ advances the sport by organizing events and programs that build community and empower all genders to compete together. US Quidditch is not affiliated with JK Rowling, Warner Bros. or Time Warner. To learn more about quidditch, visit www.usquidditch.org .

About Experience Olympia & Beyond
Experience Olympia & Beyond is the official destination marketing organization of Thurston County and Thurston County’s Sports Commission. A naturally-inspired, approachable destination situated at the foot of Puget Sound one hour south of Seattle and two hours north of Portland by car, Washington’s capital community inspires handcrafted getaways. The region is perfect for hosting sports events, meetings, weddings and events. With more than 2,700 hotel rooms throughout Thurston County there are several options ranging from unique bed and breakfasts to traveler friendly rooms. For more information visit experienceolympia.com or connect on Facebook, Twitter (@Experience_Oly) and Instagram (@ExperienceOly).

WHAT: Northwest Regional Quidditch Championship featuring three teams and 60 athletes from Idaho, Oregon, and Washington competing to be the regional champion. The top team will also qualify for US Quidditch Cup 11, to be held in Round Rock, Texas this spring.

HOW: The event is free and open to the public. Visit this page for more information:
https://www.usquidditch.org/events/special/Northwest-RC

OTHER : Youth quidditch, a non-contact adaptation of the sport taught to elementary,
middle, and high school students, will be offered on both days. Food and US Quidditch
merchandise will be available to purchase on-site.